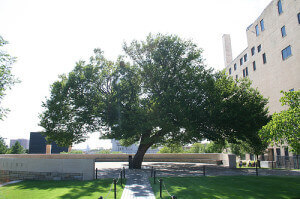 In the midst of downtown Oklahoma city stands a tall and sturdy American Elm tree that has come to be known as the survivor tree. The tree received its name after surviving one of the worst terrorist attacks on American soil, the Oklahoma City bombing, in 1995.

Even before the bombing, the tree was important because it provided the only shade in the downtown parking lot. People would arrive early to work just to be able to park under the shade of the tree’s branches. After the bombing, the tree was nearly chopped down to recover pieces of evidence embedded in it from the bombing; however, investigators were able to recover evidence from the tree’s trunk and branches and an Arborist was brought in to nurse the tree back to it’s former health.

The tree still stands today as the focal point of The Oklahoma City National Memorial and a symbol of human resiliency.