70 years after the lyrics “Chestnuts roasting on an open fire” made their way into our homes the song is still deeply ingrained in our holiday music and traditions. However, what most people don’t know is that American Chestnuts, the staple of early 20th-century Christmas winter traditions*, have been nearly wiped out.

The American chestnut used to be the most common hardwood tree in the Eastern United States making roasted chestnuts a common snack. American Chestnuts ranged from Maine to Georgia, and west to the prairies of Indiana and Illinois. It was estimated that in the Appalachian Mountains, one in every four hardwoods was an American chestnut. Billions of Chestnut trees are used to cover the rolling hills of our eastern forests. Mature trees could live up to 600 years, grow up to 100 feet tall, and average a 5-foot diameter. Their white flowers, which bloomed in the spring, were said to create a splendid view. Naturalist Donald Culross Peattie once described the sight, “their creamy June bloom so festooned the eastern hardwood forests that they looked from afar like a sea with white combers plowing across its surface.”

In 1904, a blight imported on Asian chestnuts began to take a toll on the American chestnut. This blight was first noticed on the American chestnut trees in the New York Zoological Park, now known as the Bronx Zoo. While Chinese chestnut trees weren’t very vulnerable to blight, American chestnuts had little resistance and succumbed quickly. By 1950, four short years after Nat King Cole’s song debuted, the destruction was complete. The once most predominant and majestic tree of our Eastern forests has been reduced to a handful of pre-blight survivors struggling to survive in the wild today.

The Impact On America

The loss of the American chestnut has a great impact on wildlife and the industries of business built around them. At the turn of the 20th century, American chestnuts were ranked as the most important plant in the eastern US. Chesnuts supported numerous wildlife species including, bears, deer, squirrels, wild turkeys, birds, and small mammals.

Rural towns depended on the nuts to support their farming and economy. Chestnuts were relied on to fatten livestock and were a major cash crop shipped into the big cities for the holidays. The timber industry was also affected by the loss of the American chestnut. As one of their best products, chestnut timber was used in the making of telegraph poles, railroad ties, heavy construction, shingles, paneling, fine furniture, musical instruments, and even pulp and plywood. 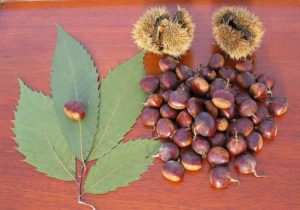 Researchers are cautiously optimistic that through these tactics the American chestnut can be restored to its former glory. However, as the lyrics “chestnuts roasting on an open fire” echo throughout your home this holiday season, let them be a haunting reminder to cherish the environment because Who knows? Your favorite tree or plant species might not survive through the next decade.

*If you want to carry on the holiday tradition of roasting chestnuts, don’t fret. Until the resurgence of American Chestnuts occurs, families can count on roasting the European and Chinese Chestnut varieties.